One of my good friends was going to be on my side of the world for the New Year. It only made sense that we pick a city to meet at so we can properly ring in 2018. After throwing out some names of different cities that were in between Germany and Georgia, we decided on the majestic city of Istanbul.

Justine was traveling from New York City and I was coming from Berlin.

We had purchased different tickets that were arriving at two different airports around 7am on the morning of December 30th.

With no data and with some direct messages through Instagram, we agreed to meet at a random red cafe in front of our airbnb in the neighborhood of Fatih.

Justine arrived to the cafe an hour before I did. I had some trouble getting a shuttle to my room but eventually made it. When I arrived Justine was no where in sight. After waiting at the cafe for about twenty minutes, I decided to walk up and down the street in hopes that I would run into her.

No luck, so I figured I’d charge my phone and wait. Long and behold she popped her head through the plastic cover and within fifteen minutes we were off to explore. First to the mesmerizing Sultan Ahmed Camii, or as tourist call it, the Blue Mosque.

It was built around 1609 by Sultan Ahmed I and faces the famous Hagia Sophia. It’s grand in color, size, and appearance. As I was taking in the culture shock, I was also trying to take in the beauty of this blue wonder. 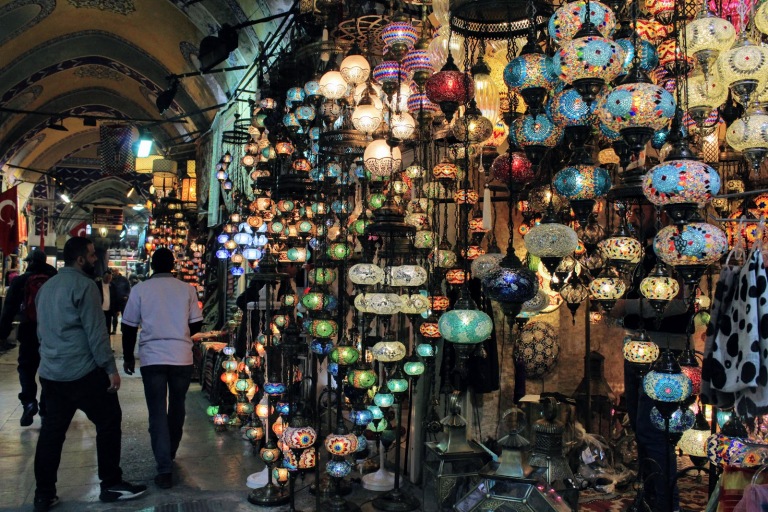 Our stay in the city was a short one so we decided to visit the “musts” like the important mosques, the famous Grand Bazaar, Spice Bazaar, and landmarks on the first day. 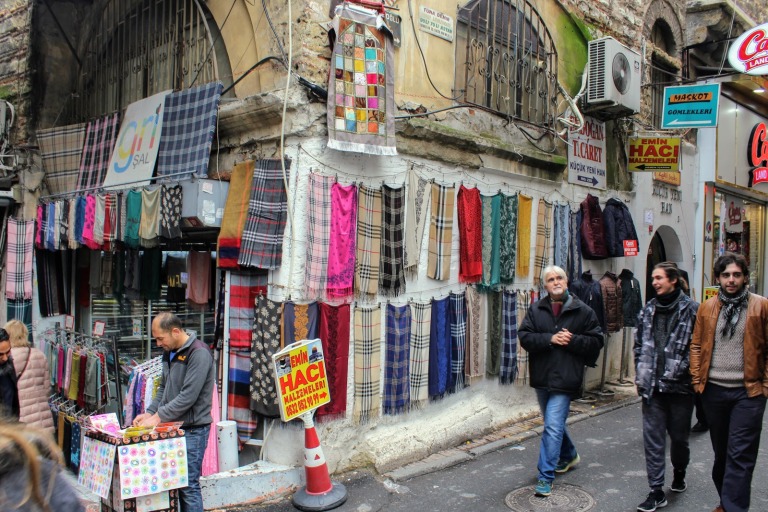 I’ve been blessed to be able to travel to quite a few places and find that I adapt quite easily to every city. Here in Istanbul I had a mix of emotions, overwhelmed, intimidated, excited. I was thrilled, it’s rare that I feel uneasy in a new city.

The religion, language, customs, and attitudes are opposite of mine, which is why I was a bit unsure of how to act. I had to remind myself that this giant metropolis has visitors from all over the world and although some practices may not be accepted the Turkish people are used to people of all backgrounds visiting their city. 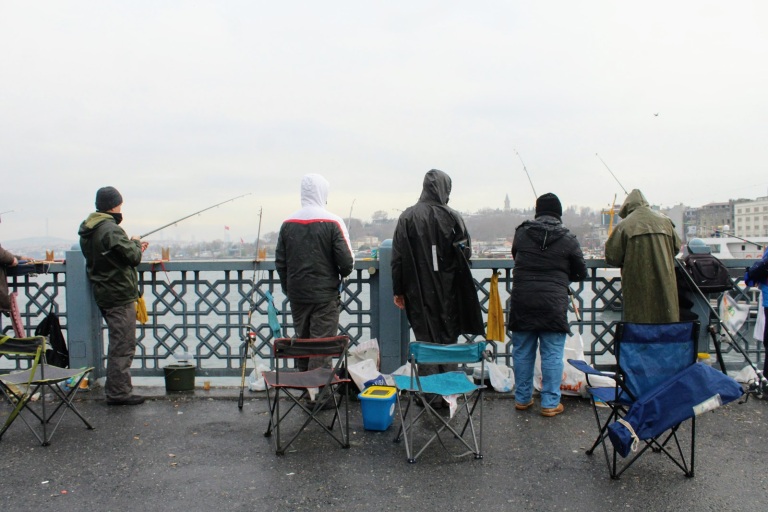 Thankfully, Justine had a friend that she met in New York who had just moved back to Istanbul. She was kind enough to show us around some neighborhoods and take us up to the Galata Tower. It was raining later that afternoon but the rain and mix of city lights made the city look magical. 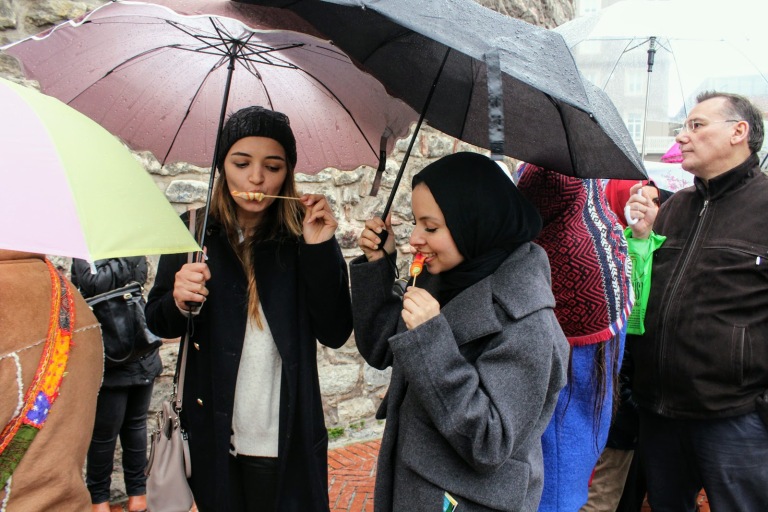 Up in the tower the 360 degree view of the city was spectacular, rain and all. The stone tower is 219 feet tall and was constructed in 1348 during the expansion of the Genoese colony. 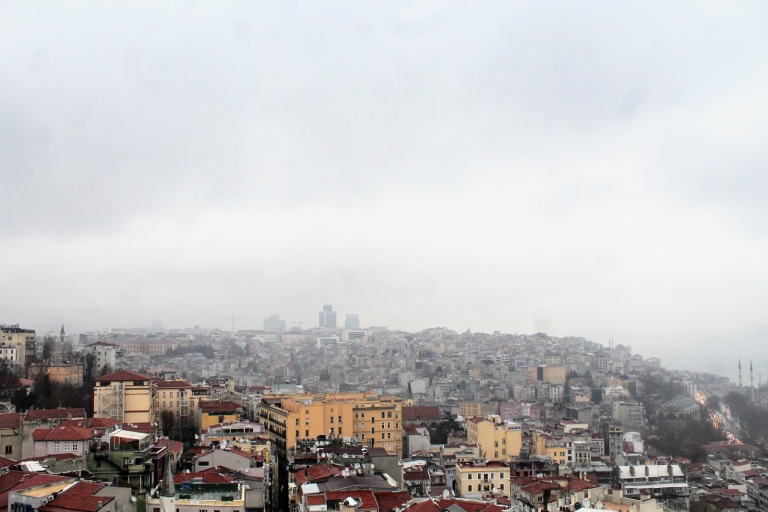 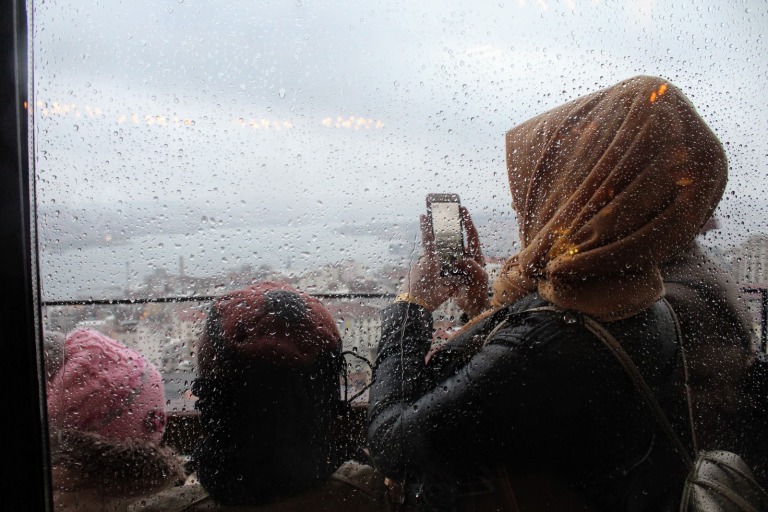 Throughout history the tower was used for different purposes. Now on the upper floor one can eat at the restaurant or even have some fun at the night club. It’s come a long way from its fire spotting days. 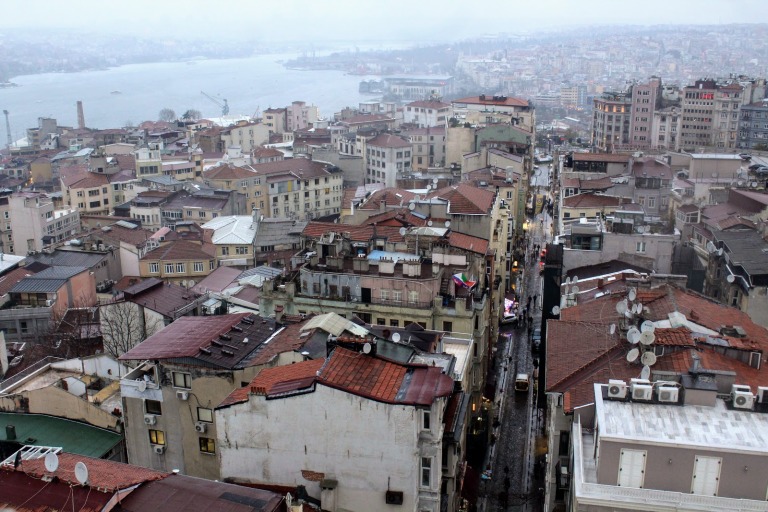 After a full day of sightseeing we decided to end our night at a cafe drinking Turkish coffee and eating some sweet baklava. The coffee was a bit strong but the baklava oh so good. I would fly back to Istanbul just to eat some.

There were hundreds of flavors to try with different fruit and nuts but we stuck with the classic pistachio. 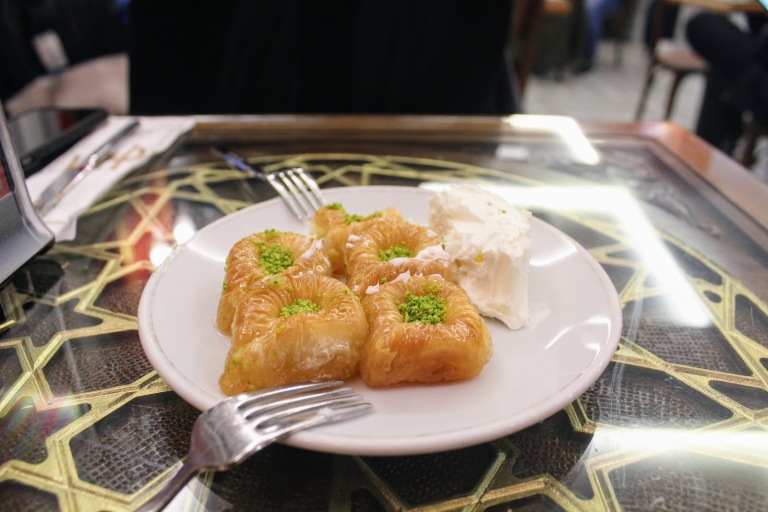 With a nice full tummy we were ready to head back to our room and knock out. We had to save our energy for the following night.

The following morning we were up bright and early to take in our last full day.

We wanted to end our last day of 2017 with a breakfast made for queens. Justine had come across a beautiful photo on Instagram where a woman was looking out a window and eating a scrumptious breakfast from a rooftop. After a few minutes of Instagram stalking we found the hotel that serves this breakfast, we were there by foot within twenty minutes. 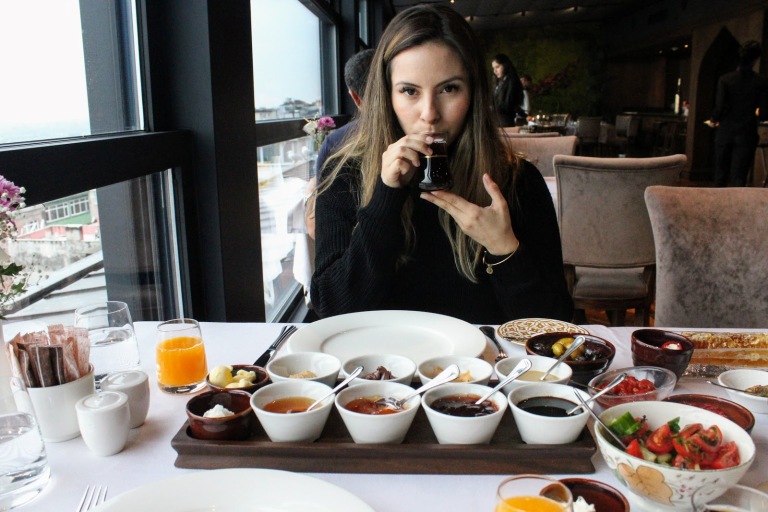 This breakfast was absolutely divine and the best breakfast I’ve ever had. We knew we had ordered a meal for two but were not expecting what was brought out to us. Eggs, sausages, pastries, salmon, olives, raw honey, different sauces, the works. The colors were so beautiful we were in awe. 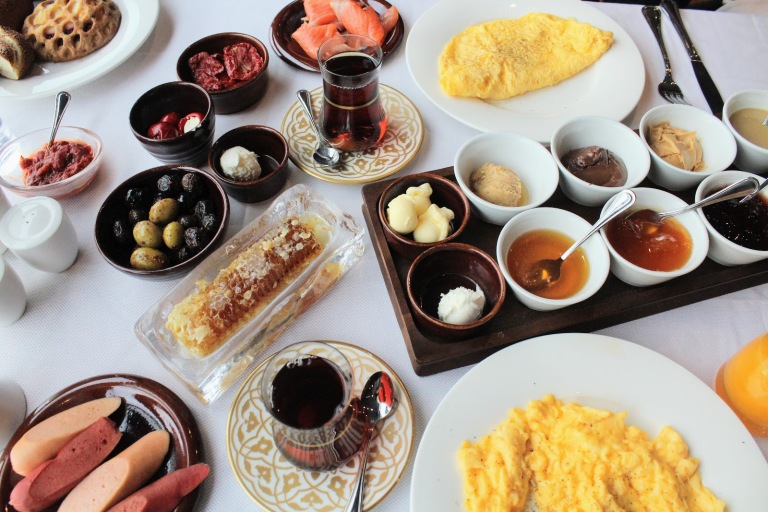 On top of the food being delicious, the view we had was breathtaking. Right out of the window we could oversee rooftops and the ocean, not to mention there were only two other couples in the whole restaurant. It was a perfect morning. 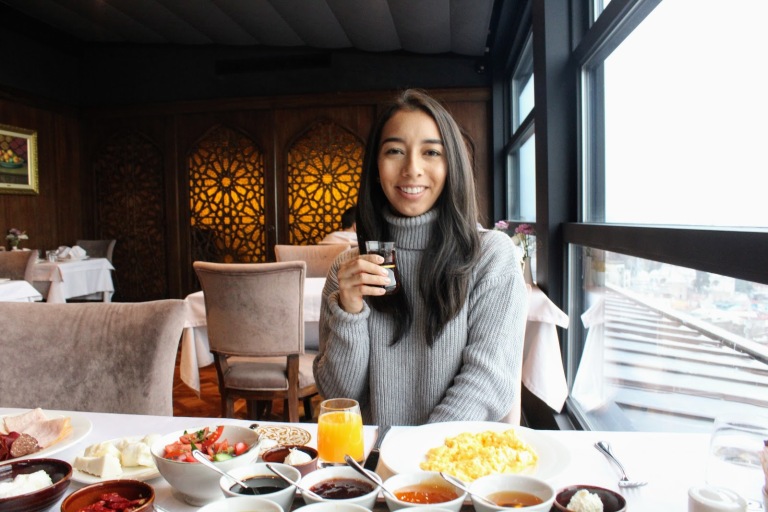 We were in no rush to eat our breakfast, we took our sweet time and enjoyed every bite of food and sip of Turkish tea.

After our lovely breakfast we grabbed some goodies at the spice market and sampled on different kinds of Turkish delights. 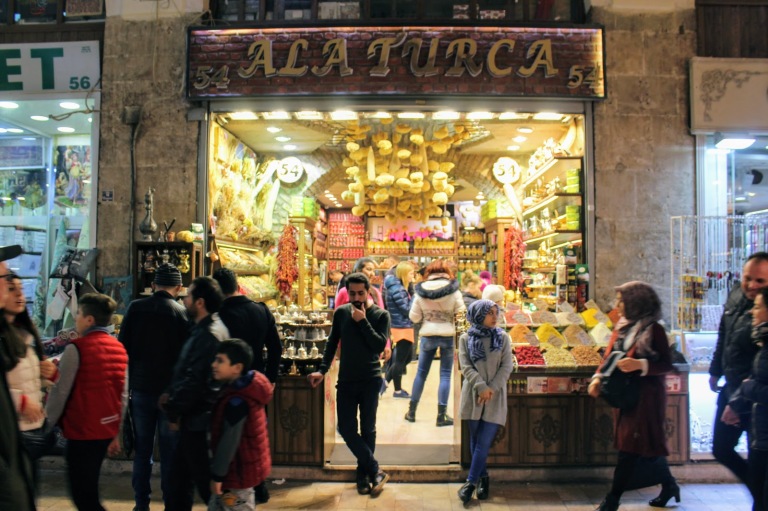 Our final stop was in the colorful neighborhood of Balat. This was my favorite part of our trip, walking amongst locals and the beautifully skittle colored homes. 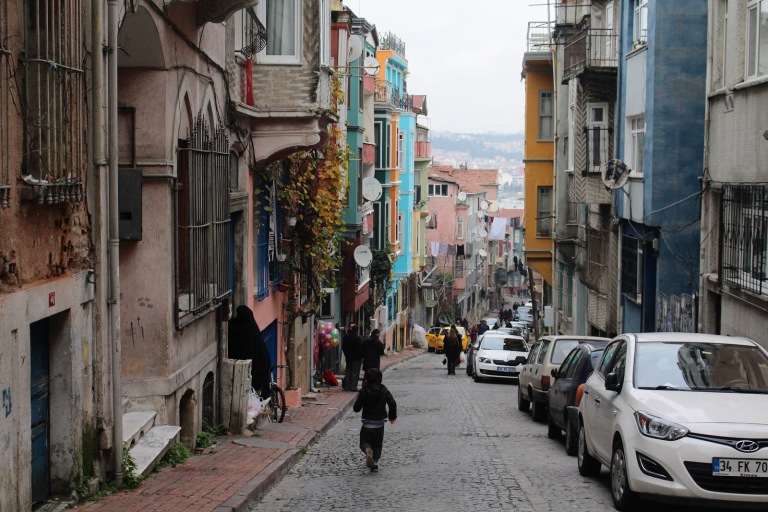 Getting here was a bit of a mission, we had gotten off on the wrong stop and wandered off in the wrong direction but eventually got to the heart of the neighborhood.

Clothes were hanging off the balconies, children running down the streets, old women poking their head out the windows, it was perfect.

As the sun was about to set we decided to have our final Turkish tea at this adorable cafe with a giant Turkish flag painted in the front. The owner, actually every Turkish person we met, was so kind and hospitable. He ended up giving us the tea and some crackers for free. He was more than happy to gift it to us and requested that if he ever visits the US we treat him with the same hospitality.

The two days of exploring were short but sweet. I had the best travel partner and an amazing New Years Eve. The last place I would have thought of celebrating in was Istanbul but we went with the flow and had a fun night despite the nerves I had because of last years terrorist attack. We welcomed in the New Year in Taksim Square and danced the night away, or morning I should say. Not long after Justine and I had to head back to pack up our belongings and get ready for our flights

We spent just under 48 hours in the city and got a great feel for it. I would love to return one day to visit the different neighborhoods and the outskirts of Istanbul. I know that the media and peoples perception of the city can be negative but all I’ll be sharing with people are the beautiful and positive experiences that I had in those 45 hours.