My only reason for taking a day trip to San Sebastian was to taste the oh so talked about food, more specifically pintxos as they call it in the Basque language. Pintxos are bite sized treats pierced with a cocktail stick through them but really, throughout Donostia as it’s known in the Basque language, all treats with or without cocktail sticks are referred to as pintxos. 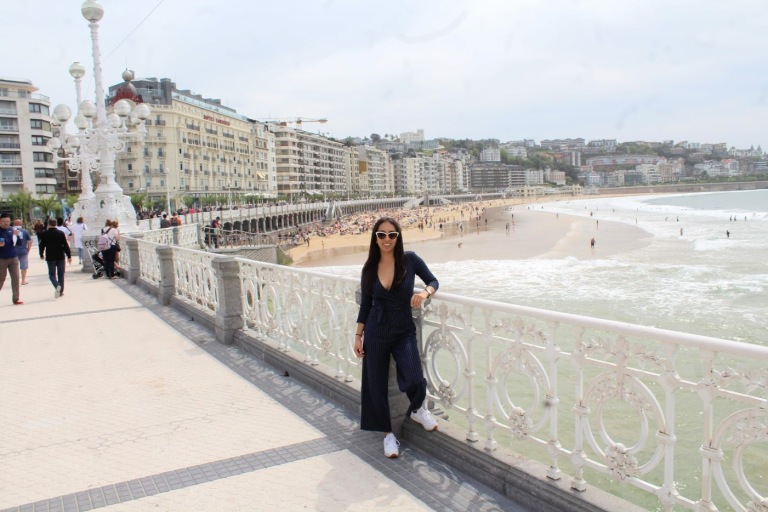 Okay so maybe the coastal weather and beach was another reason for me to visit San Sebastian but my main priority was going on a pintxos tour, hopping from bar to bar and gobbling down a variety of pintxos.

San Sebastian is one of the most visited cities in the Basque Country. Located in northern Spain and only 12 miles from France it can feel as if you’re in a different country because of the language they speak, Basque or in Spanish, Euskera. Basque is a unique language that is linguistically different from other European languages but no need to stress, plenty of locals also speak Spanish.

There are a few beaches you can visit before you dive into the food scene, Zurriola, Ondarreta, and the most popular, Concha. Concha Bay is in the middle of the city and has white sand that stretches far off into the distance. It’s easy to see why it’s one of the most visited beaches in Spain.

Before I went into “parte vieja” the old town, to begin the pintxos tour, my boyfriend and I climbed up Monte Igueldo to catch a panoramic view of the city from up top. 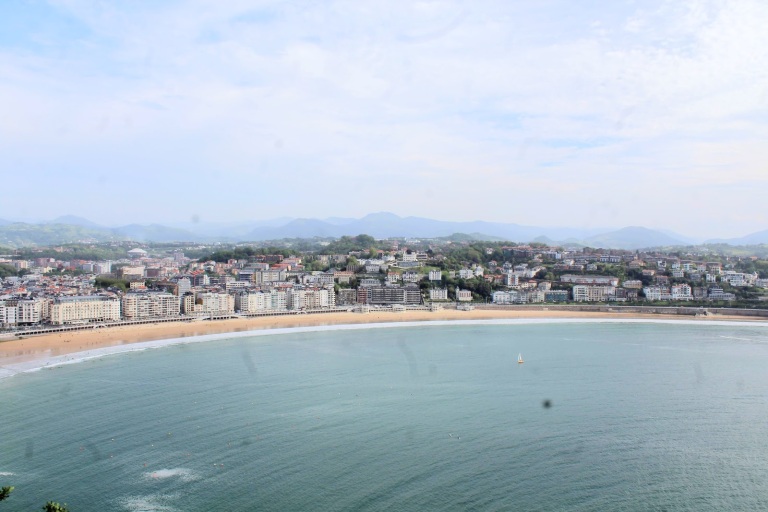 It took about 30 minutes to walk up but once we did we enjoyed the beautiful view of the whole city. On our way down we stopped by the pedestrian walkway and watched the emerald colored waves crash into the large rocks.

Here’s where the fun begins. Eating pintxos is a pretty Spanish experience no matter what city you are in but it is especially unique here in the Basque Country. 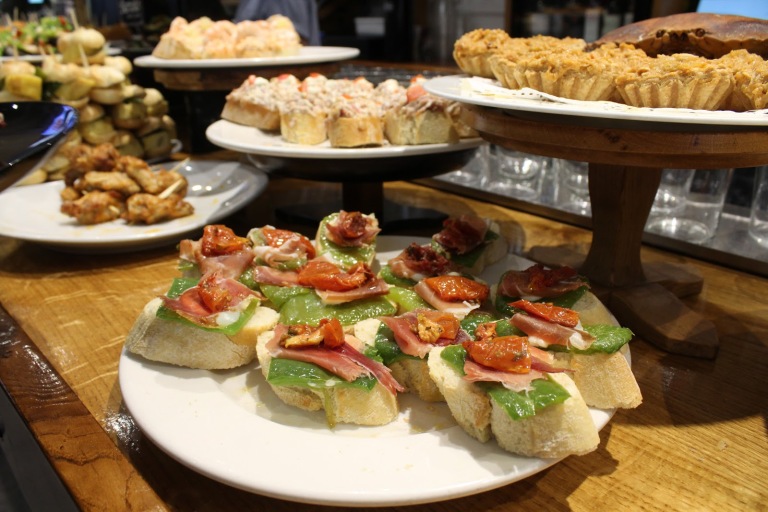 In the city I live in, Burgos, we have pretty darn good tapas and pinchos. The price for them is unbelievably cheap being that we are located in the middle of the country, away from the popular cities and far away from the coast.

Since San Sebastian is such a hot destination paying double the price for pintxos here comes with the territory. With that said, I had high expectations and thankfully I wasn’t let down. It’s easy to see why it ‘s one of the culinary capitals of the world and why millions of tourist flock to this coastal city. As the late great Anthony Bourdain stated “even the bad restaurants are good.”

Pintxos here vary from big to small, hot to cold, bad to Michelin star rated, and traditional to experimental. Bars can get pretty packed so it’s best to plan which ones you plan on visiting, or of course, you can just hop around and hope that you’ll at least have a place to stand in. This brings me to my next point, no empty tables in sight, no problem, pintxos are meant to be eaten standing up for the most part, it’s the Spanish thing to do.

Another important note, each bar has their own check out etiquette but the ones I went into, you don’t order your food, you simply pick up an empty plate and select the ones that stand out to you from the beautiful spread. Once you’re finished, bring them to the counter and the bar tender will ring you up. 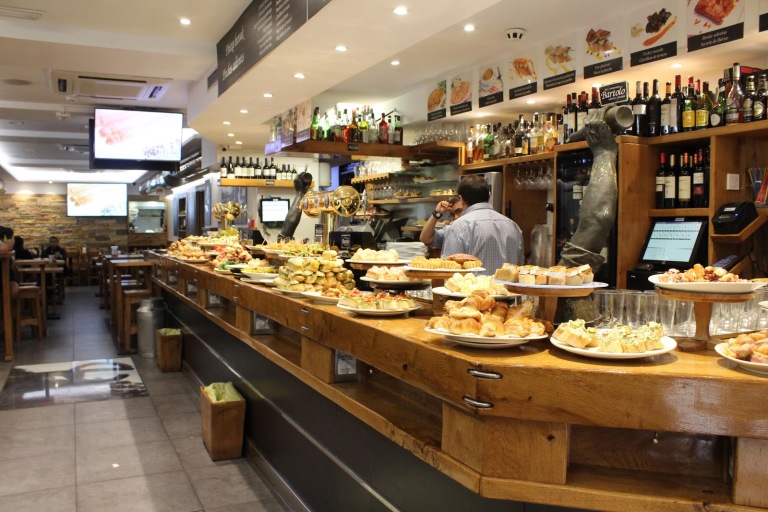 It’s like a buffet except the spread of food is a lot more exciting than your typical buffet, you are pretty much guaranteed to salivate upon arrival. You may not have a clue of what you’re putting on your plate but that’s part of the fun. If you have any doubts, the chef or bar tender is there to guide you. 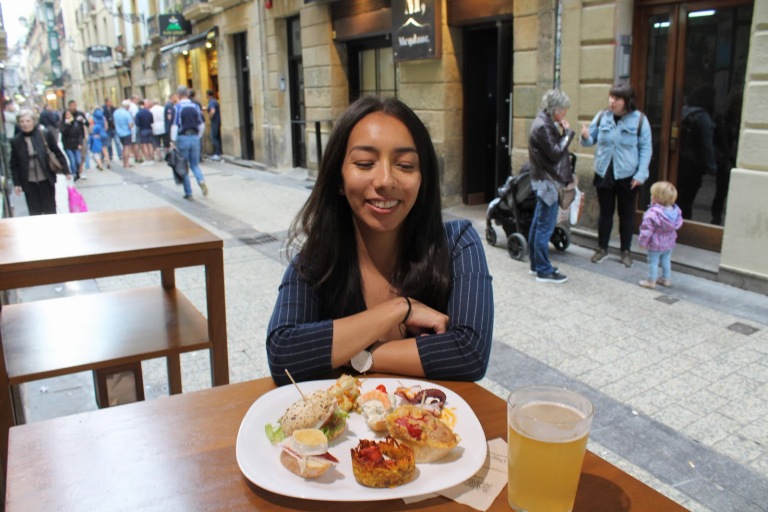 We made it to three different bars, the first one being Borda Berri. Borda Berri had tons of positive reviews on different apps and for good reasons. Great atmosphere and luckily we got a table to sit at. The bar had a homey vibe and we ordered four different pintxos involving pulpo, fish, egg, and queso de cabra. I don’t remember the names of them but I suggest you stop by this bar during your visit.

We made a pit stop at a small bar also in the old quarter but sadly can’t remember the name, I just remember ordering pulpo, and it was delicious. Our final stop was at Bartolo, another highly reviewed bar. We got in around 7 p.m. and were able to snag a table outside. Since it was our final stop for the evening we ordered about six pintxos and experimented a little more with our taste buds. We ordered some gildas, foie gras, merluzas, pulpo, tortilla, and more queso de cabra.

With some good money spent on pintxos and beer, we decided to buy some chocolate for our three hour ride back to Burgos instead of purchasing a desert. Right in the old quarter next to the bars, there’s a chocolate shop named Aramendia Pasteleriak. This shop specializes in chocolate but also making fun designs out of it like shoes, purses, and animals. We spent less than two euros on different chocolate samples and a chocolate covered orange. By the way, did you know that the world chocolate in Basque is txokolate? Just a fun fact.

That does it for my pintxos tour! It was on my Spanish bucket list and I’m glad I got to check it off. San Sebastian has a rich cultural history and even richer history with the cuisine. There are plenty of videos, shows, and articles that will guide you to the highest Michelin star rated bars and restaurants like the famous Arzak. Whether you follow them or not make it a point to go to northern Spain and get lost in the cuisine. Enjoy!