After I graduated college, I was pretty sure that I would never have the opportunity to have two paid weeks off for spring break ever again in my life but if you work in education, you are pretty much guaranteed one. So, I took the opportunity to head to the west and spend a few days in Porto, Portugal and then go on a mini road trip through one of the most beautiful regions in Spain, Galicia. 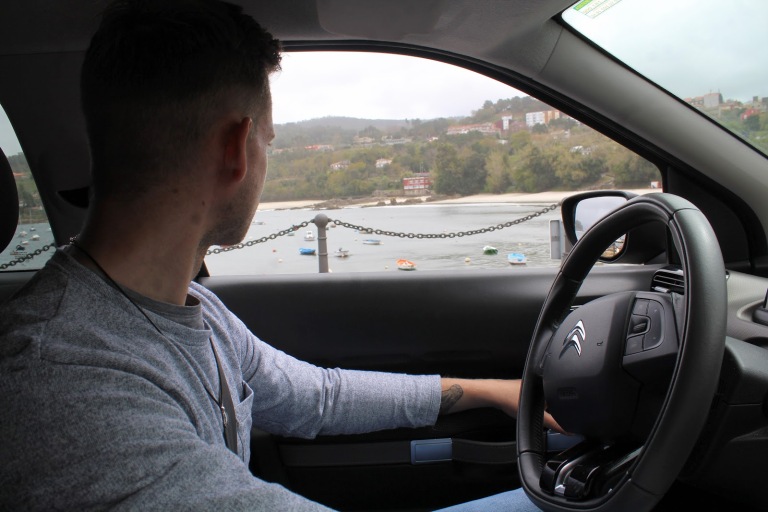 Galicia has an interesting history that most people outside of Spain aren´t aware of. Galicia is located in the northwest of the country and is known for it´s hilly landscape and beautiful coastline, 1,030 miles of coastline to be exact.

If you drive through this region you will go past many valleys, rivers, and canyons. In the distance you can see a number of mountains, the biggest being Macizo Galaico.

Galicia is located on the Atlantic coast creating a mild temperature with very heavy rainfall. That is the reason why the region is so green and lush. The dense forests provides the region with over 2,000 different plant species. If you didn’t know any better you’d think you’re in Ireland, which leads me to my next point. 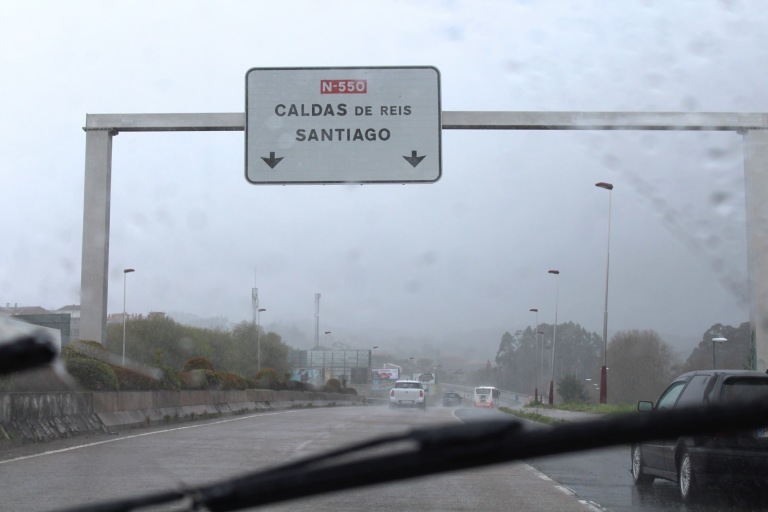 This area was first inhabited by the Celtic group, Gallaeci, during the Paleolithic period. People here refer to themselves as Galegos and even have their own language, Galego. It sounds similar to Portuguese and it makes sense since Galicia is literally right above Portugal. During  Castilian rule the official language was Castellano and over time Galego became a lost language. Although most people speak Castellano, you can hear a fair amount of people speaking Galego, most being the elders of the region. I was told that during the Franco years the teaching of Galego was  prohibited therefore making the population loose their understanding of the written and oral language. 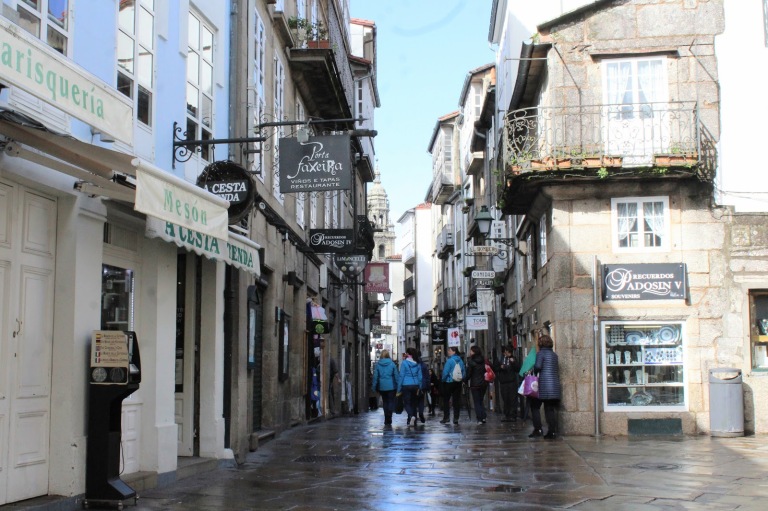 Galicia has its own coat of arms, flag, and anthem, just like other regions in Spain. The Celtic roots are very much part of the culture and can be seen in the amount of bagpipers registered in the region, castros-hill forts built by the Celtics still standing throughout the region, and the legends told amongst the people. Similar to Samhain, a Gaelic festival celebrating the end of the harvest season and beginning of winter, Galegos hold their own festival celebrating Oenacus, a Celtic deity. 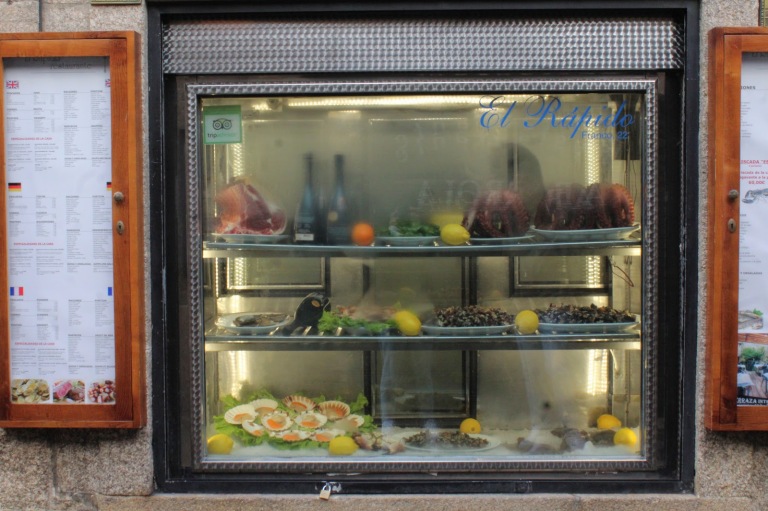 Now on to my experience. My boyfriend and I took a bus from Porto to Vigo, Spain, which is located in the south west of Galicia. It took less than two hours to arrive and once we did, we took a city bus to a car rental. We picked up our car, not sure of the model, but it was black, spacious, and had a usb cable so that we could connect our music. Music is everything when it comes to roadtrips! Our goal was to make it to A Coruna by the evening.

The first stop we made was in the city of Pontevedra. Funny enough, when I got the offer to teach here in Spain, they asked if I wanted to live in Pontevedra, Burgos, or a small village an hour outside of Madrid. In the end I chose Burgos for a number of reasons and visiting Pontevedra only confirmed that I made the right decision.

Pontevedra is located in the northwest of Galicia. The name has latin roots which means “old bridge” because surprise, surprise, it references an old Roman bridge that spanned across the Lerez River in the 12th century. The province is humid and made up of many rural neighborhoods. The population has over 80,000 people with a majority speaking spanish not galician. We only stood here for about an hour but the city is filled with a number of historic  landmarks being that history here dates back to the 1st century BC. Although unemployment is very low for youth the city is quite lively and filled with Enlglish Teaching Assistants. It´s a fast growing city with a number of the residents of the province living in Pontevedra itself. It´s a cute city and if you happen to be driving by it it´s worth making a stop for a few hours.

After Pontevedra we headed north for one hour to Santiago de Compostela, the capital of Galicia. Santiago is most famous for being the final destination for those doing the “Camino de Santiago”, a pilgramge that has been walked by millions of people from all over the world since the 9th century. It was originally called “The Way of St. James” and began as a Christian pilgrimage. There are many routes one can take to get from the east to west of Spain but the most travelled route has a scallop shell that guides all the pilgrims. There are two legends that explain why the shell is the symbol of the camino but I´ll let you research that on your spare time.

Aside from partaking in the camino or watching the pilgrims rejoice in front of the catedral, you can enjoy the many things the city has to offer. Let´s begin with the cathedral, the most famous landmark of the city. It was built in the 1300´s and stand in the center of the grand plaza. Unfortunetly it was under construction while we visited so I didn´t find the need to take a photo of it. It is usually always raining in this city, when we arrived we were greeted with rain but as the day continued the sun would poke out every now and then.

With that said it’s worth your time to eat some seafood, sit at a cafe and order a  tarta de santiago, shop around, and of course, visit museums. Some of the most well known ones are the Centre for Contemporary Arts and Fundacion Eugenio Granell. 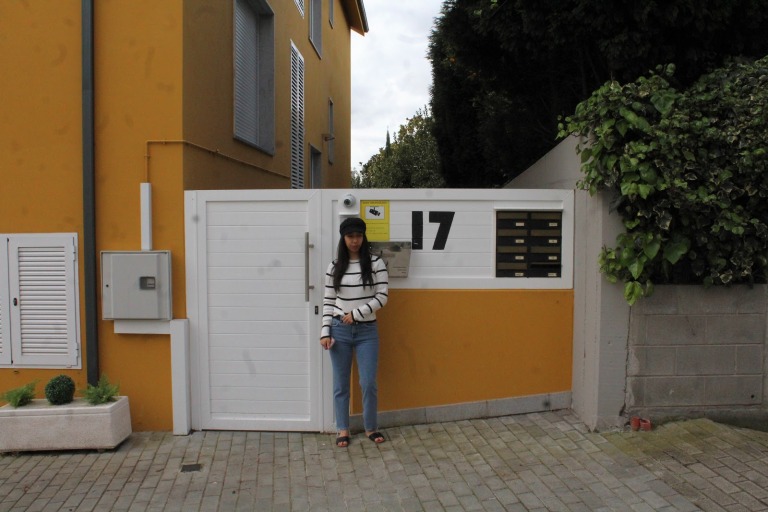 We only spent a couple of hours in the city before we headed north to our final destination, A Coruna. Before we began our trip we researched some of the most beautiful beaches in Galicia and kept reading about beaches in A Coruna. We decided that that is where we wanted to stay the night and explore the following day. A Coruna is located on a peninsula and serves as a port city.

We booked an apartment at a complex about five minutes from the beach. It had large windows and tons of natural light, perfect for photos. I recommend glancing through apartments at booking.com rather than a hotel. You´ll save money and have the opportunity to cook and really make yourself at home.

The neighborhood was safe and filled with colorful aprtment complexes. There are about 400,000 inhabitants in the metro are making the city quite lively and diverse. There is a decent sized population of South Americans and if you know me, you know I love diversity, so being around people of different ethnicities made me feel at home and gave me a comforting feeling as I was walking around.

You can’t leave Galicia without trying its seafood. As it´s located right by the sea you have a variety of options to choose from including tons of pulpeiras. In the morning after we visited the beach we drove to Pulpeira O´Fiuza, because according to yelp, it has some of the best octopus in town.

Located on Avenida de Navarra, this hole in the wall looks like your standard casual sit down joint but what goes on behind the bar is where the magic happens. They are best known for their pulpo a la gallega. I ordered a small portion of this dish and oh man let me tell you, it was delcious. Throughout Galicia they are known for smothering their pulpo in olive oil and sprinkling it with salt and paprika. I eat super slow, so I enjoyed every single bite of that octopus. If you´re in this part of town I highly recommend making a pit stop here.

Just like the other cities in Galicia you can find a number of things to do here. One of the most popular things to do is visit the Roman Tower of Hercules, a lighthouse that has been around since the 2nd century AD.

You can´t leave without visiting at least one of the beaches. We spent some time at Praia de Riazor. The water was so blue and beach nearly empty. It was the perfect stop before we made our way to the city of Ourense. 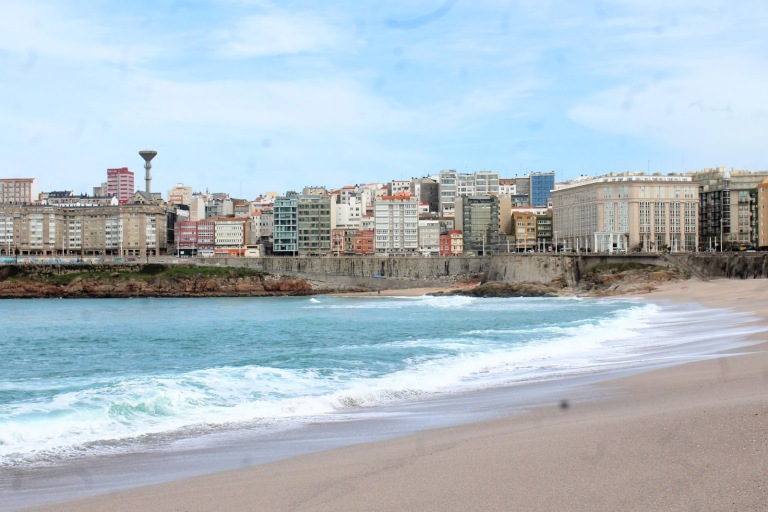 The drive to Ourense from A Coruna took about two hours but we wanted to stop there before heading back to Burgos to relax in the famous hot springs. 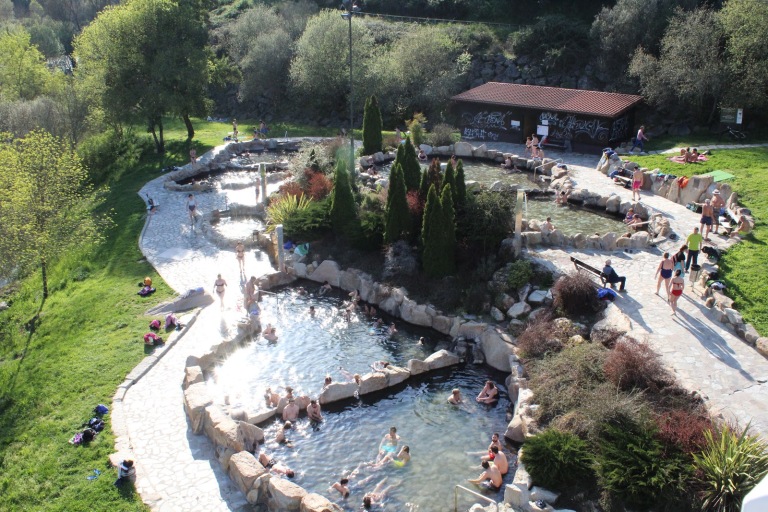 We figured that before making the 6 plus hour drive back to Castilla y Leon, we should soak in the hot soothing water to relax and take in some Vitamin D. There are tons of thermal baths thoughout Galicia but we decided to visit the ones along the Minho River called, Outariz y Burga de Canedo. Getting there is a little complicated to explain, I´m actually not sure how we got there but based of reviews online that said look for a dirt parking lot at the side of the road, we knew we arrived at the right location when we spotted it. We saw a few people walking back in swimsuits and asked them how to get to the actual springs. They directed us to walk across the bridge and from there we´ll see stairs to walk down. The pools are not seperated by males or females, and you have to wear a bathing suit. There were about six pool, some cold, warm, and hot. We spent our whole time in a hot one and it was so relaxing. It´s amazing to think that many of the baths throughout the region date back to the Romans. We didn´t spend time in the actual city of Ourense but the thermal baths made up for it.

At about six o´clock we decided to head back to Burgos. I was sad that I had to leave this beautiful region but glad that I spent time here since most tourist head to Andulusia and Catalonia. There’s so much more to see in Galicia but felt that I got a good taste of the landscape, culture, and food. No telling when I’ll be back but if you feel like getting away to a less touristy area in España, come here, you won’t be disappointed.