Skip to content
Portugal was a country that never intrigued me while I was living in the states. Once I moved to Spain and realized how close it was, I planned on visiting it during my spring break in April.

Originally, I had planned on visiting the capital, Lisbon, but after taking my colleagues recommendations about Porto into consideration,  I chose to visit only Porto and ended up more than happy with my decision. 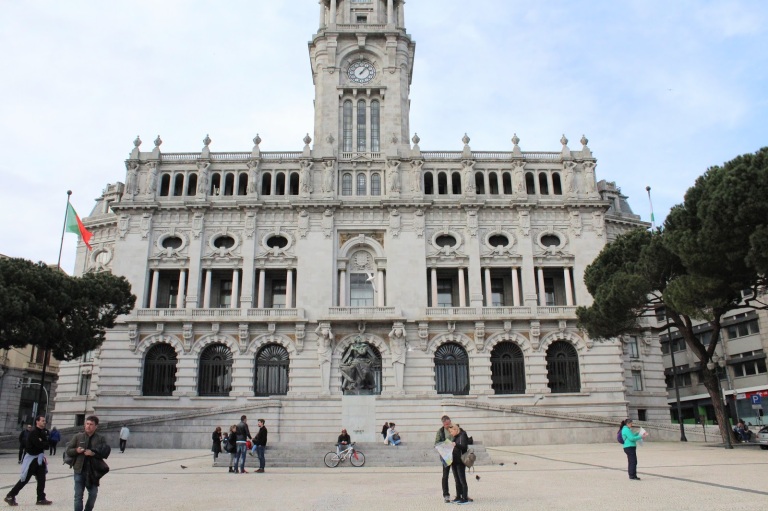 On Easter morning,  April 1st, I took a bus from Burgos to Porto. I was set to take off at 3:30 in the morning but for whatever reason it was over two hours late. As I was waiting confused and irritated this chilly morning, the station security kept assuring me that international buses are always late and that eventually it would show up. At 5:30 a.m. I decided, forget it, I’m going home, will deal with the refund later, and will take a bus later in the morning. Not even ten steps out the station, I saw a bus drive into the station figured that that was my bus, so, I ran back in and the security rushed me onto the bus. 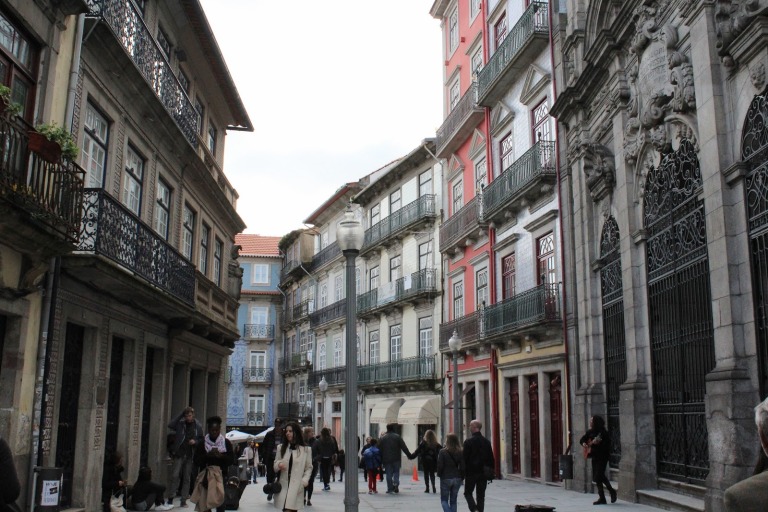 The driver didn’t even bother checking my ticket, he just handed me a voucher, and off we were. The bus was full of Portuguese people and the only language spoken was portuguese, of course. We made a pit stop in a small village 30 minutes outside of Burgos in which all passengers, including me, handed the barista the voucher which allowed us a free piece of bread and drink of our choice. At this point, I was just following what the passengers were doing. I didn’t want to stray too far from the bus in fear that I would get left behind.

Eight hours, two drivers, many crazy turns, and random pit stops later, I made it to Porto early in the afternoon. I took a few minutes to gather myself and map out the directions to our bookings.com apartment, which was located in the Lapa neighborhood, 30 minutes from the center. The owner wasn’t there so I was instructed to get the keys from the bakery across the street. Once I did, I went up to the top floor and immediately went out to the balcony to take in the view.

My boyfriend was set to arrive around sunset, so I decided to cease the late afternoon and head down to the Douro River to take in some sun and capture some nice shots on my camera. 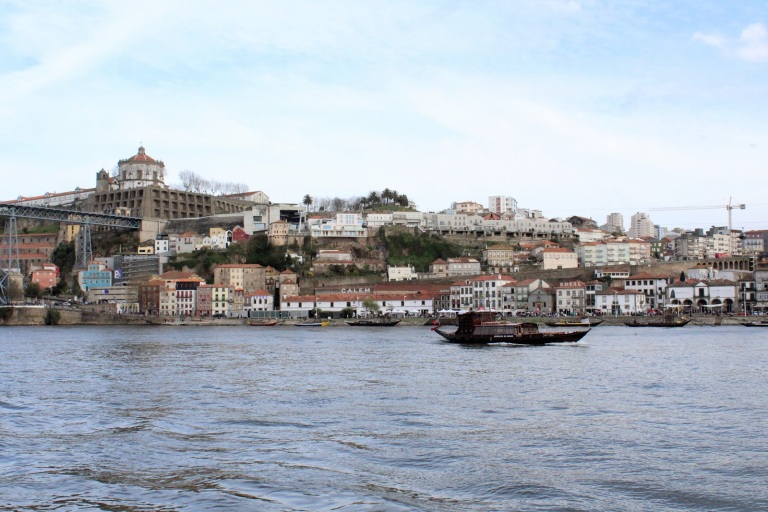 The walk to the center was peaceful. There weren’t to many tourist out with it being Easter, I’m sure that a majority of people were with their families. Along the way I passed a number of bakeries, restaurants, colorful homes, and beautiful buildings made up of colorful azulejo, intricate ceramic tile. 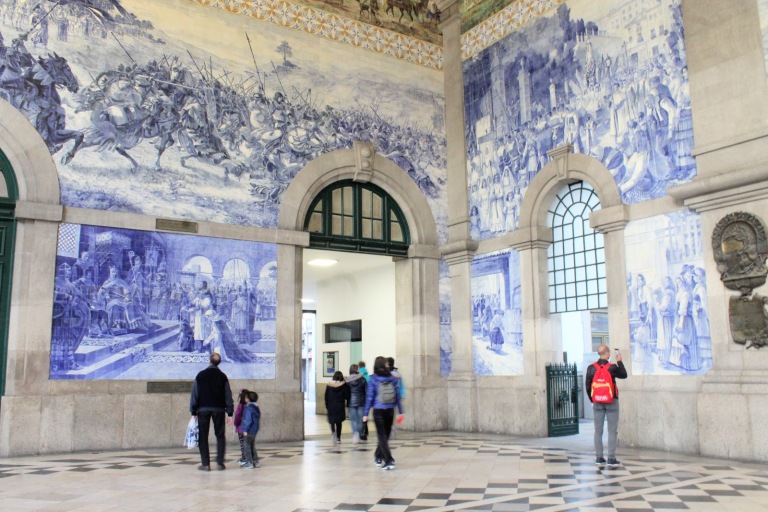 Azulejo was brought over by the Moors in the 15th century and the name originates from the Arabic word az-zulayj, which means ‘polished stone’. One of the most famous buildings in Porto is the São Bento Railway Station, which is covered with thousands of azulejo. The tiles layout the history of Portugal and is easily one of Jorge Colaços best pieces of work.

Porto is the second largest city located in Northern Portugal and in ways resembles San Francisco, CA. With it’s hilly landscape, colorful townhouses, and overcast weather, it’s pretty much the city by the bay. The photo right above reminds me of the Painted Ladies minus the statue in the front.

A little before sunset I met my boyfriend near the São Bento Railway Station and convinced him to head to Ribeira Square which sits right by the river. As you may know, port wine is fortified and produced specifically in the north of Portugal, Douro Valley. There are different types of red and white that you can order but I stuck with a traditional ruby red sweet port. Aside from him knocking over the wine on my jeans, it was a perfect evening. 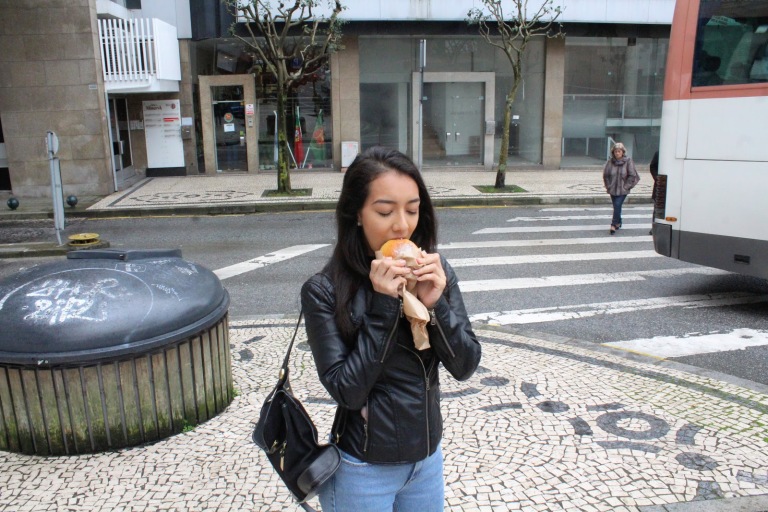 The following morning we wanted to kick the day off  like a pair of locals. Not to far from our apartment  was a pastelaria, pastry shop, filled with tons of sweet and savory pastries. I found the croissants to be the most appealing because they didn’t look like your typical croissant. They weren’t airy, crispy, or flakey, instead very doughy but so delicious.

Other typical pastries you can find are pastel de nata (custard tart), pastel de feijaro (bean tart), and bola de berlim (mini doughnut). Of course, there are tons more but in case you find yourself at a pastry shop in Porto, you can use this as a reference. Don’t forget to ask for the croissant! 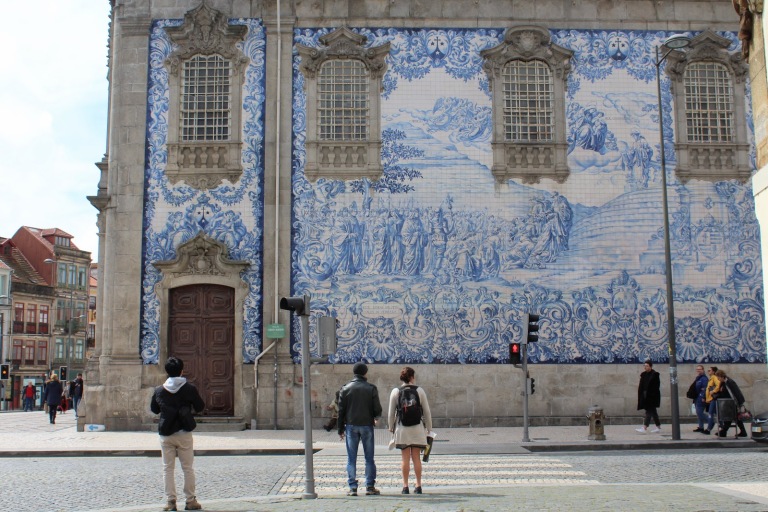 Since the weather was decent we wanted to catch the seafront. We hopped on a tram which took us to a beach near the Foz do Douro neighborhood. Out in the distance was a red and tan lighthouse and very strong waves crashing against the wall. I got splashed multiple times but didn’t care. Being by the ocean was a nice change of scenery coming from freezing northern Spain. 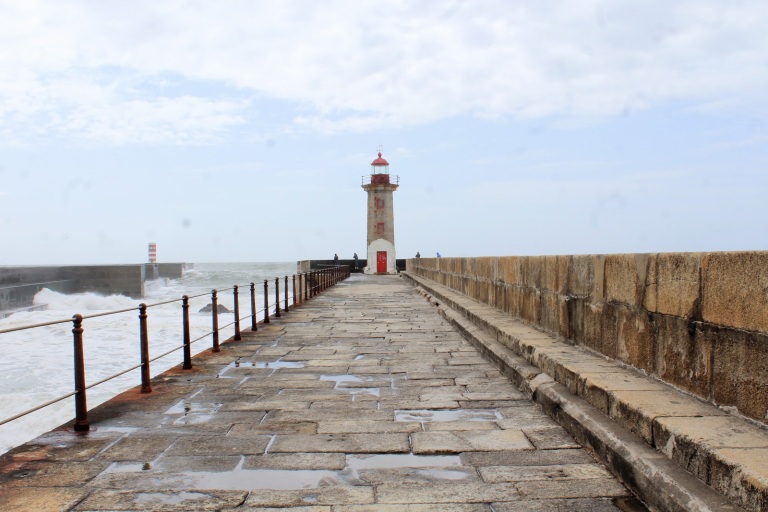 One of my favorite things to do while visiting a new city is seeing the skyline view. I love being on top of the city and capturing locals, building, and homes from atop. I read that the Clerigos Tower offers one of the best views in the city. The tower sits on top of the famous Clerigos Church, a baroque church constructed in the 18th century. After paying a few euros we were able to roam the church and top of the tower. It was extremely windy and after snapping a few pics I decided to put my camera away for fear that it would fly away. Regardless, the orangey brown rooftops and colored facades of the buildings was beautiful to see.

After the tower we walked around the Miragaia neighborhood and checked out a few shops. We came upon an interesting boutique that specialized in making custom t’s. I wasn’t planning on purchasing any clothes but both my boyfriend and I came across cool designs that we couldn’t pass up. Feel free to check out Pajaro Malandro online and if one of the designs catches your fancy, go ahead and order!

Not to far from the boutique was a hip Vegetarian restaurant, de Terra Baixa. I had an impression that Portugal was a meat eating country and finding a vegetarian restaurant would be difficult but nope right in the heart of the city was this special place.

We were just in time for the vegan lunch buffet and for just a few euros one could indulge in some of the tastiest vegan recipes for an afternoon meal. I also thought that since the interior was trendy and chic that the patrons would be more of a hipster crowd, once again I was proven wrong. People of all ages and backgrounds were here and for it being my first vegan meal ever, I was quite impressed and didn’t crave anything afterwards, I was happily stuffed. 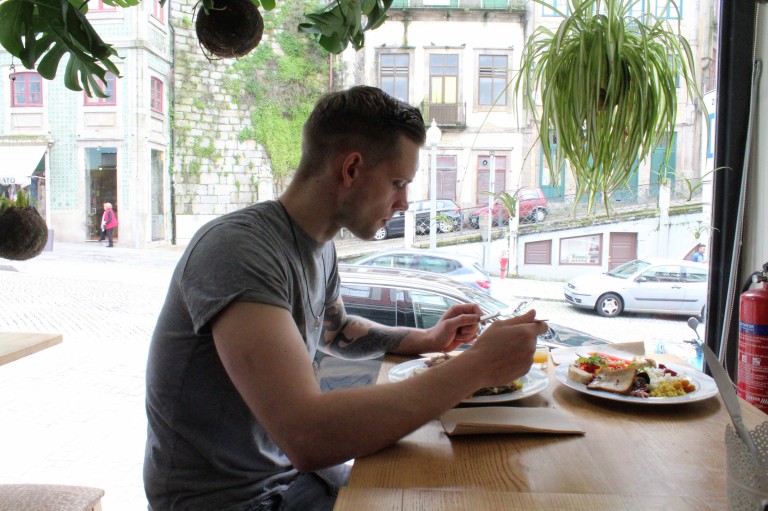 Porto doesn’t fall short of offering it’s residents a good time. From art to music, food to nightlife, architecture to sports, it’s easy to fill up your to do list here. 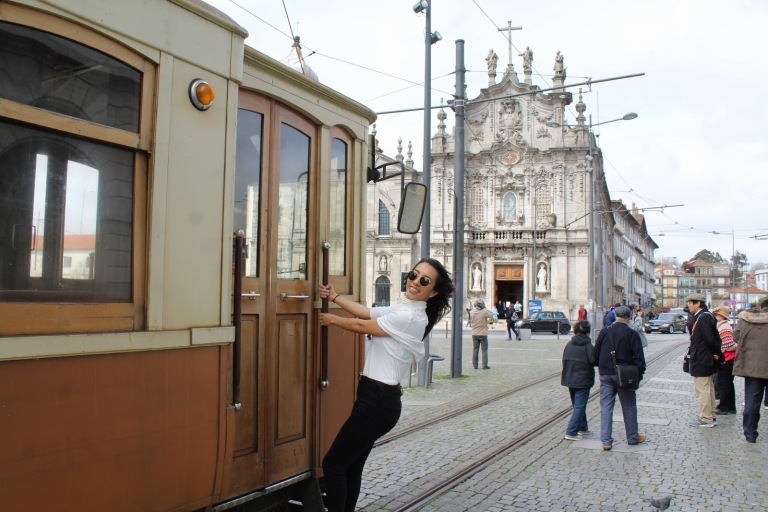 Also you can pick a number of neighborhoods to visit, each offering a different taste of Porto. Another more local neighborhood that I wanted to visit was Vila Nova de Gaia.

It is actually located outside of Porto, on the other side of the Dom Luis I Bridge. The view of Porto from here is spectacular and gives you a reason to walk across the double decked metal bridge, which was constructed in the early 1900’s. 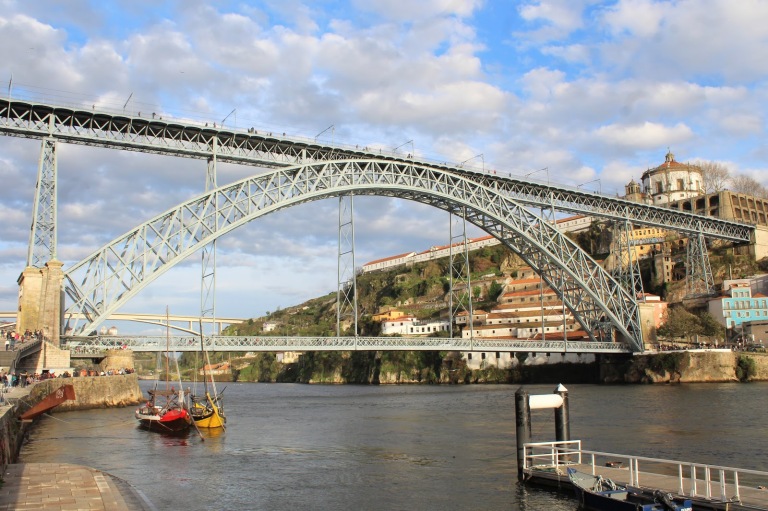 Being that it’s double decked people can walk on both the lower and upper pedestrian paths, you can admire the lush plants and colored buildings from here. The lower level allows for pedestrians and vehicles to pass through and the top is used for only pedestrians and trams.

As I keep mentioning, Porto is filled with beautiful bright and pastel colored buildings. Every corner that I turned no matter the neighborhood, I was bound to come across a unique surprise. One of my favorite walls being this yellow one pictured below. Although it was only the beginning of Spring, these bright colors can brighten up even the most gloomiest of days.

On our final full day we made the most of our morning and afternoon. We started it off was some pastries of course then made our way to Serralves, a cultural institution that has a museum, park, and villa. 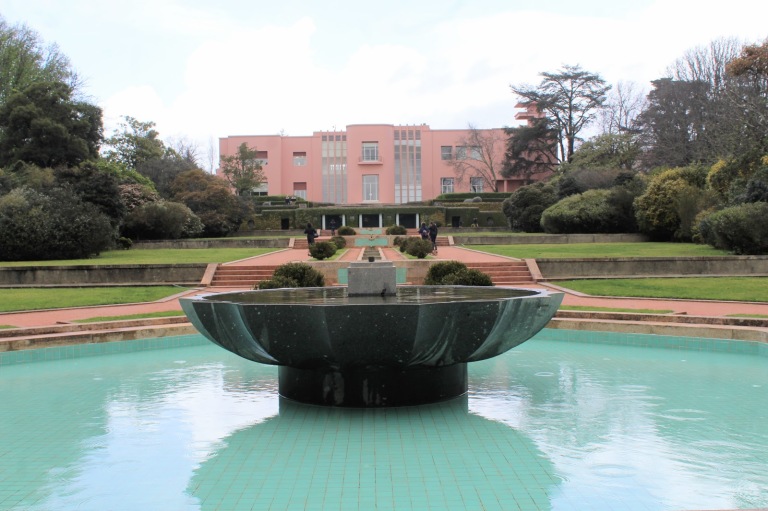 The museum was designed by Alvaro Siza Vieira and the institution focuses on sharing and informing its visitors about modern art. The main reason I wanted to visit this museum was because of the beautiful villa.

In classic art deco style the villa which is located in the park was originally designed as a private residence for the Cabral family. It was built by the second count of Vizela and designed by Jose Silva. I didn’t go inside the house, nor am I sure that I even had the option, but the salmon pink streamline moderne villa was constructed in the 1920’s and is just as trendy and chic as ever.

The park itself is made up of different gardens and sculptures created by world renowned artist such as Richard Serra, Dan Graham, and Luc Tuymans. With 18 hectars of land to wander through, you’ll come across a number of plants, tree alleys, and small hills. It’s a perfect way to spend an afternoon.

On our way back to the Ribiera we stopped by BASE, an outdoor garden patio, to sip on some coffee and water, located in the heart of downtown. The vibe was mellow and the music was relaxing, a combo of smooth r&b and beats. It’s right next to the Clerigos Church and is a great place to just sit back and relax.

We strolled one last time through the Ribiera before heading to dinner at Patio do Duque located in the Fontainhas neighborhood. My boyfriend’s a big fan of the Fork App and actually came across this restaurant through it. We booked our dinner around 6 p.m. and for whatever reason there was no one there, so we got the whole upstairs to ourselves.

Once you walk into the restaurant you immediately feel a sense of home and love. The chef and waitress were so kind and made us feel extremely welcomed. The chef took the time to breakdown the entire menu to us and suggested we order a variety of tapas to share. She brought us a pitcher of spritzy sangria and about twenty minutes in started to bring out the tapas. 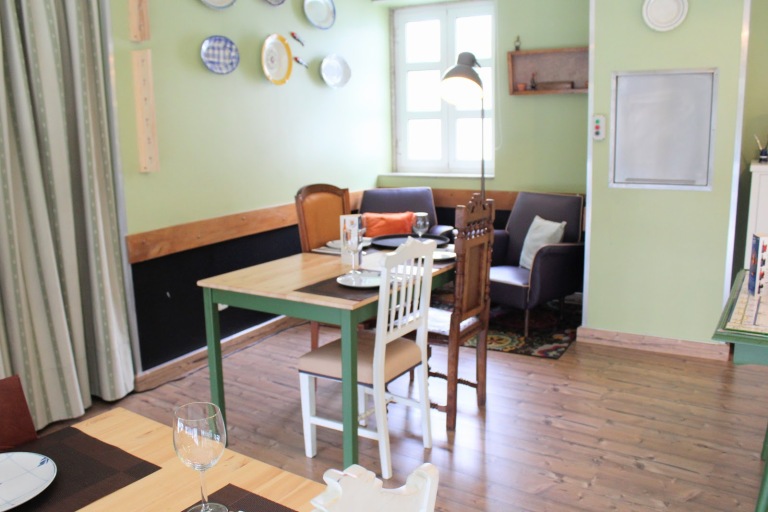 After dinner we went back and rested because we had an early bus to Vigo the following morning. I enjoyed Porto and would love to go back to Portugal to explore different cities. Porto is a city full of gems and I highly recommend this city as a starting point for anyone visiting the country. It’s edgy, traditional, and I guarantee that you’ll never get bored here.