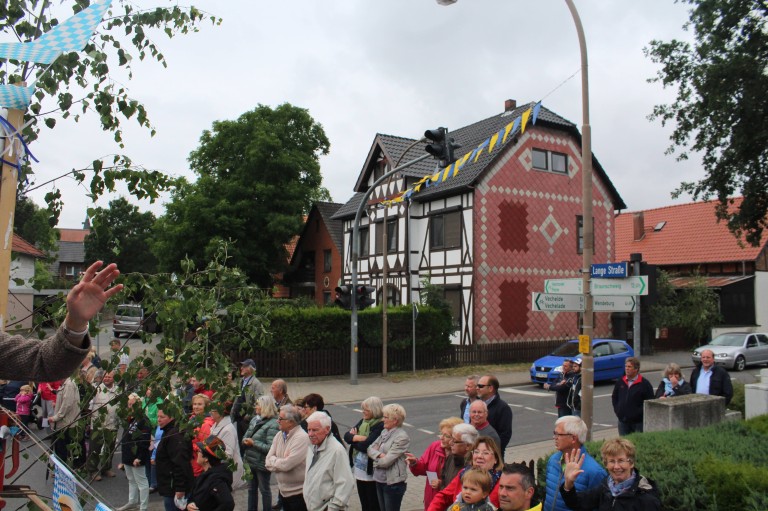 Processions through the village, flag waving, target shooting, marching bands, beer for breakfast, what exactly am I rambling off about you may ask, well schützenfest of course. 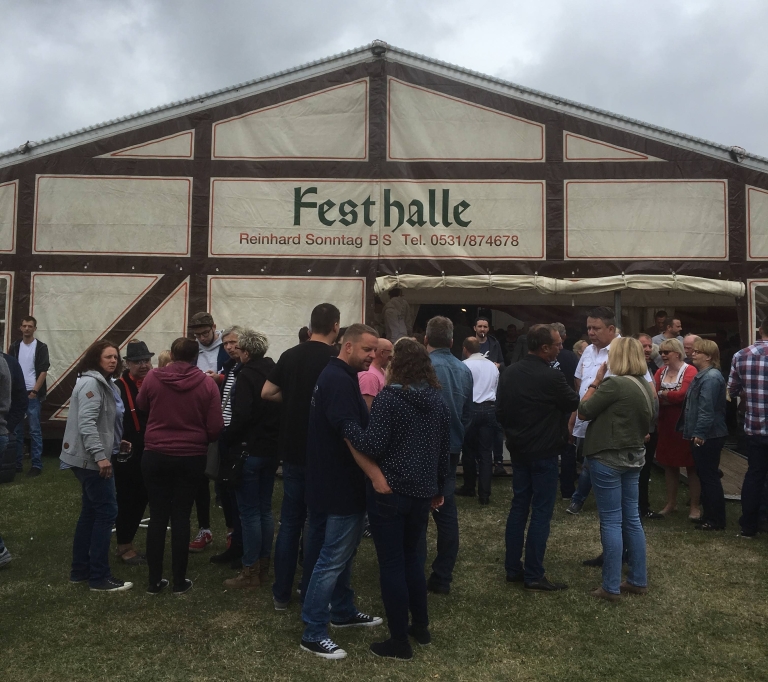 One of my favorite experiences I had in Germany was attending schützenfest in my partners hometown of Bortfeld, which is located in the state of Lower Saxony.

This tradition dates back centuries to medieval times. Local groups began to practice different ways of defending themselves and in turn were incorporated into town defense laws.

Townsmen began to combine festive processions and festivities during military practices. Since then the tradition has stuck and depending on the region one lives, schützenfest varies on activities and length of time.

This summer festival is celebrated throughout Germany but primarily in Bavaria and Lower Saxony.

The festival takes places in a public house or pavilion. In Bortfeld, it took place in the middle of a vacant lot where a makeshift tent was then built. It can fit numerous people, but in this village of under 3,000 you need to purchase a ticket to enter.

My partner and I arrived on a Saturday afternoon just in time to catch the last bit of the target competition. Participants strive to hit a wooden eagle and whoever wins is crowned the Schützenkönig, king of marksmen. 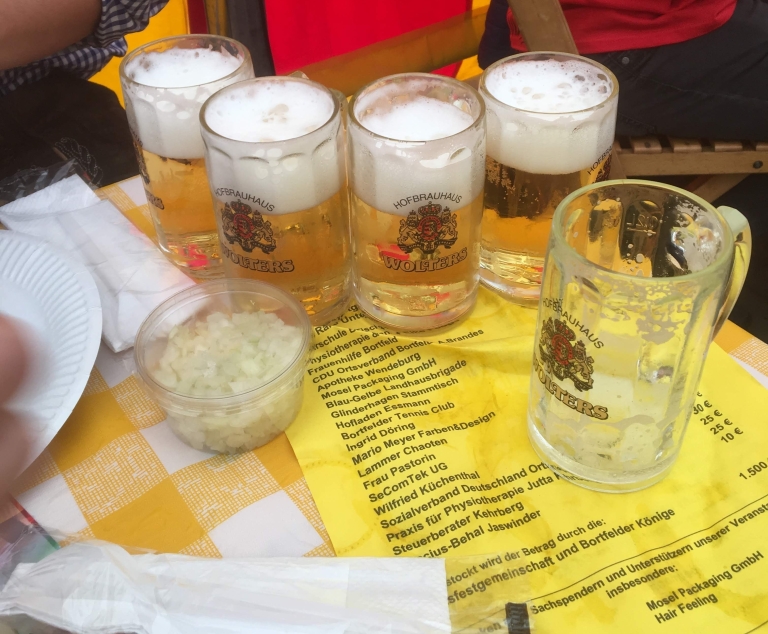 Afterwards, a procession begins throughout the village where the residents slowly start making their way towards the large tent. Beer is freely handed out with no questions asked. I was introduced to the villagers and immediately given a beer or two.

We made a pit stop to my partners friends home who was hosting a party before arriving at the tent. It just so happened that that Saturday night Germany was playing Sweden and boy oh boy was the German pride strong in that tent. It was tense at times because this would determine if Germany would continue on in the cup. The match was extremely close but in the end Germany took the W leading 2-1. The beer kept flowing and residents partied all night.

The party didn’t stop there. The following morning at 9am sharp, residents were dressed and ready for the big breakfast. Locals were dressed in traditional garments, the live band was on stage jamming away, and yes beer was flowing. The breakfast was delicious, fresh buns were handed out in batches, each table had plenty of plates of different sausages, cheese, pickles, and tomatoes. The food plus the beer could put any one in a food coma but the day didn’t stop there.

After breakfast, Bortfeld prides itself in hosting a tractor procession through the village.

Groups form months in advance to discuss the theme, dress, and tractor that they will ride throughout the village.

Not all residents hop on a tractor, many spectators like watching from the streets with their family and friends. 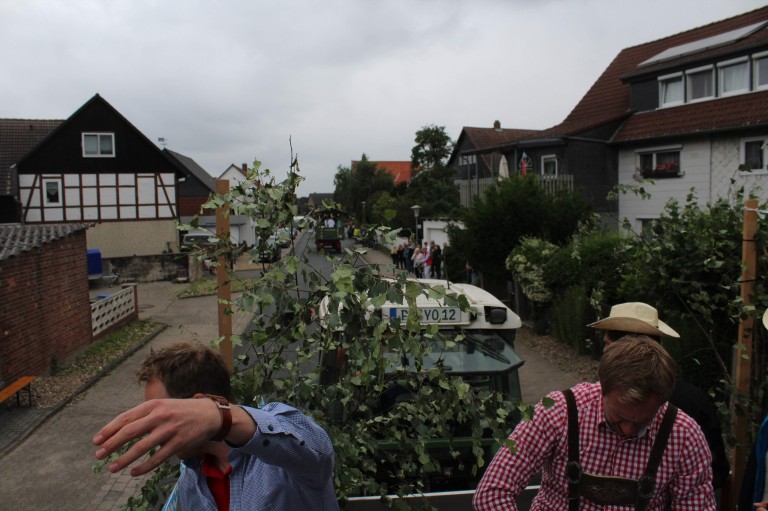 I didn’t know I would be riding on a tractor but I’m glad I did because it was an absolute blast. In our tractor we had beer of course, loud techno music, and bags of candy. The candy wasn’t just for us, it’s tradition to toss it at the spectators on the street. The kiddies love it.

The procession takes a couple of hours, a lot of stop and go, but it’s something I’ve never done before. I’ve gone to countless of huge New York City parades and have been on the back of huge semi trucks representing groups, like Girl Scouts back in the day, but this was so intimate. 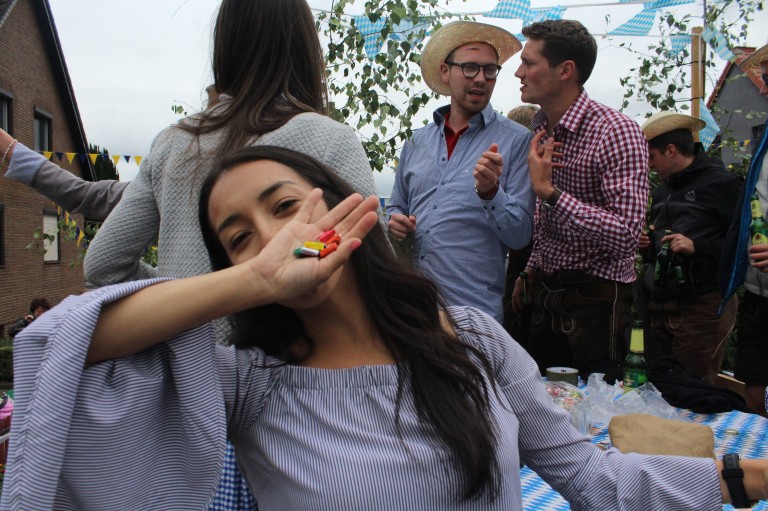 It wasn’t broadcasted, no major news outlets were there, it was just tradition. A tradition that has been part of this village since forever. Residents of all ages were participating and making the most of this weekend.I was an outsider from California but welcomed in with open arms, and for that weekend, I felt like an honorary German.

It’s moments like this that make traveling so fun. I also got the opportunity to attend Schützenfest in Hannover, the largest one in the world I have to add. Honestly it just reminded me of summer fairs in my state. It was fun but Schützenfest in Bortfeld is one of a kind. It wasn’t touristy just raw fun that I got to share with my honey in his hometown.